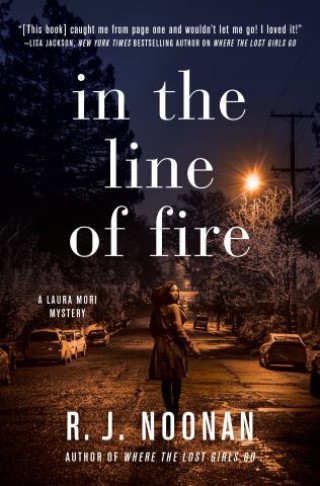 In the Line of Fire

In the vein of Lisa Jackson and Julia Maynard, a dark and compulsive mystery about secrets too big for the small town’s britches.

When secrets are too big to buy, it’s worth killing to bury them.

Growing up, Laura Mori was constantly overshadowed by her far more successful siblings. She had a tough time appeasing her parents, and now that she’s a police officer, recently promoted to detective, they still seem less than fazed. Everyone knows a cop’s salary—it’s meager, to say the least. But Laura has found her calling—she was born to be a detective and is determined to prove it, if not to her parents, then at least to the boys club that is Sunrise Lake PD. She sticks out like a sore thumb as the only young female minority, but she has resolved to at least seem like an unshakeable thumb.

The next case file on her desk turns out to be a bank heist and it should be easy enough, but what starts off as a one-and-done job quickly begins to seem too by-the-book and oddly like a notorious series of deadly bank hits from years past dubbed Twilight. But it’s a dead end—Twilight is only ever mentioned in hushed tones, and there’s little to no history on it in the department. And then she receives her first sign, of many more to come, that her investigation is not welcome. Alongside her partner Z and stunningly attractive FBI agent Nick Derringer, she begins to pull on the frayed thread, and that’s when she sees the bloody writing on the wall: the only other young female cop on the force was KIA during Twilight.

With too much on the line to lose, including her own life, Laura must get to the bottom of the case and fast, or she, too, will become history.

R. J. Noonan: Rosalind Noonan is a New York Times bestselling author and a graduate of Wagner College. She lives in the Pacific Northwest, where she writes in the shade of some towering two-hundred-year-old Douglas fir trees. This is her second Laura Mori mystery under the name R. J. Noonan.