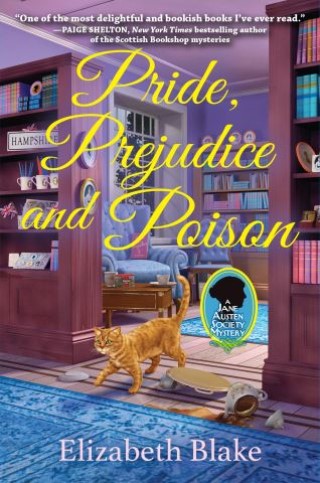 In this Austen-tatious debut, antiquarian bookstore proprietor Erin Coleridge uses her sense and sensibility to deduce who killed the president of the local Jane Austen Society.

Erin Coleridge’s used bookstore in Kirkbymoorside, North Yorkshire, England is a meeting place for the villagers and, in particular, for the local Jane Austen Society. At the Society’s monthly meeting, matters come to a head between the old guard and its young turks. After the meeting breaks for tea, persuasion gives way to murder—with extreme prejudice—when president Sylvia Pemberthy falls dead to the floor. Poisoned? Presumably...but by whom? And was Sylvia the only target?

Handsome—but shy—Detective Inspector Peter Hadley and charismatic Sergeant Rashid Jarral arrive at the scene. The long suspect list includes Sylvia’s lover Kurt Becker and his tightly wound wife Suzanne. Or, perhaps, the killer was Sylvia’s own cuckolded husband, Jerome. Among the many Society members who may have had her in their sights is dashing Jonathan Alder, who was heard having a royal battle of words with the late president the night before.

Then, when Jonathan Alder narrowly avoids becoming the next victim, Farnsworth (the town’s “cat lady”) persuades a seriously time-crunched Erin to help DI Hadley. But the killer is more devious than anyone imagines.

Elizabeth Blake: Elizabeth Blake has written ten published novels, six novellas and a dozen or so short stories and poems under other pseudonyms. Many of her works appear in translation internationally. Winner of both the Euphoria Poetry Competition and the Eve of St. Agnes Poetry Award, she is a two time Pushcart Poetry Prize nominee and First Prize winner of the Maxim Mazumdar Playwriting Competition, the Chronogram Literary Fiction Prize, Jerry Jazz Musician Short Fiction Award, and the Jean Paiva Memorial Fiction Award. She was a finalist in the McClaren, MSU and Henrico Playwriting Competitions. She is a Hawthornden Fellow and Writer in Residence at Bydcliffe, Lacawac and Karunā Colonies.