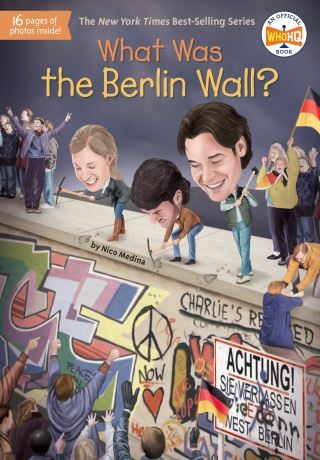 What Was the Berlin Wall?

The Berlin Wall finally came down in 1989. Now readers can find out why it was built in the first place; and what it meant for Berliners living on either side of it. Here's the fascinating story of a city divided.

In 1961, overnight a concrete border went up, dividing the city of Berlin into two parts - East and West. . The story of the Berlin Wall holds up a mirror to post-WWII politics and the Cold War Era when the United States and the USSR were enemies, always on the verge of war. The wall meant that no one from Communist East Berlin could travel to West Berlin, a free, democratic area. Of course that didn't stop thousands from trying to breech the wall - more than one hundred of them dying in the attempt. (One East Berliner actually ziplined to freedom!) Author Nico Medina explains the spy-vs-spy politics of the time as well as what has happened since the removal of one of the most divisive landmarks in modern history.

Nico Medina: Nico Medina is the author of several Who HQ books, including What Was Stonewall?, Where Is Mount Everest?, Where Is Alcatraz?, Who Is Aretha Franklin?, and What Was the Ice Age?