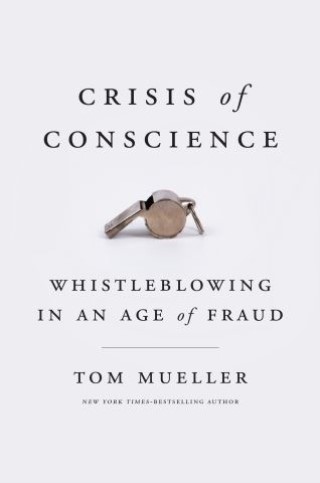 Whistleblowing in an Age of Fraud

"A call to arms and to action, for anyone with a conscience, anyone alarmed about the decline of our democracy." — New York Times-bestselling author Wendell Potter

"Powerful...His extensively reported tales of individual whistleblowers and their often cruel fates are compelling...They reveal what it can mean to live in an age of fraud." — The Washington Post

"Tom Mueller's authoritative and timely book reveals what drives a few brave souls to expose and denounce specific cases of corruption. He describes the structural decay that plagues many of our most powerful institutions, putting democracy itself in danger." —George Soros

A David-and-Goliath story for our times: the riveting account of the heroes who are fighting a rising tide of wrongdoing by the powerful, and showing us the path forward.

We live in a period of sweeping corruption -- and a golden age of whistleblowing. Over the past few decades, principled insiders who expose wrongdoing have gained unprecedented legal and social stature, emerging as the government's best weapon against corporate misconduct--and the citizenry's best defense against government gone bad. Whistleblowers force us to confront fundamental questions about the balance between free speech and state secrecy, and between individual morality and corporate power.

In Crisis of Conscience, Tom Mueller traces the rise of whistleblowing through a series of riveting cases drawn from the worlds of healthcare and other businesses, Wall Street, and Washington. Drawing on in-depth interviews with more than two hundred whistleblowers and the trailblazing lawyers who arm them for battle--plus politicians, intelligence analysts, government watchdogs, cognitive scientists, and other experts--Mueller anatomizes what inspires some to speak out while the rest of us become complicit in our silence. Whistleblowers, we come to see, are the freethinking, outspoken citizens for whom our republic was conceived. And they are the models we must emulate if our democracy is to survive.