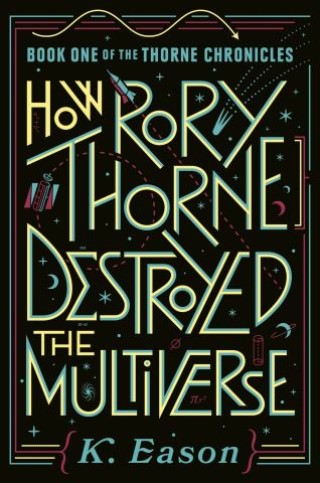 How Rory Thorne Destroyed the Multiverse

Book One of the Thorne Chronicles

Rory Thorne is a princess with thirteen fairy blessings, the most important of which is to see through flattery and platitudes. As the eldest daughter, she always imagined she’d inherit her father’s throne and govern the interplanetary Thorne Consortium.

Then her father is assassinated, her mother gives birth to a son, and Rory is betrothed to the prince of a distant world.

When Rory arrives in her new home, she uncovers a treacherous plot to unseat her newly betrothed and usurp his throne. An unscrupulous minister has conspired to name himself Regent to the minor (and somewhat foolish) prince. With only her wits and a small team of allies, Rory must outmaneuver the Regent and rescue the prince.

How Rory Thorne Destroyed the Multiverse is a feminist reimagining of familiar fairytale tropes and a story of resistance and self-determination—how small acts of rebellion can lead a princess to not just save herself, but change the course of history.

K. Eason: K. Eason is a lecturer at the University of California, Irvine, where she and her composition students tackle important topics such as the zombie apocalypse, the humanity of cyborgs, and whether or not Beowulf is a good guy. Her previous publications include the On the Bones of Gods fantasy series with 47North, and she has had short fiction published in Cabinet-des-Fées, Jabberwocky 4, Crossed Genres, and Kaleidotrope.