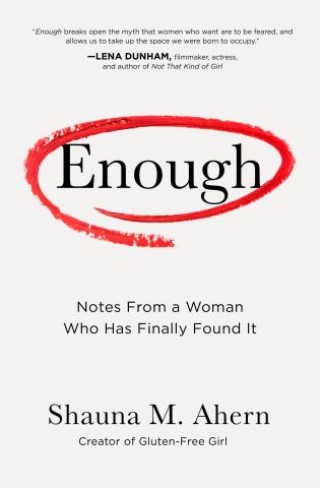 Notes From a Woman Who Has Finally Found It

Like so many American women, Shauna M. Ahern spent decades feeling not good enough about her body, about money, and about her worth in this culture. For a decade, with the help of her husband, she ran a successful food blog, wrote award-winning cookbooks, and raised two children. In the midst of this, at age 48, she suffered a mini-stroke. Tests revealed she would recover fully, but when her doctor impressed upon her that emotional stress can cause physical damage, she dove deep inside herself to understand and let go of a lifetime of damaging patterns of thought.

With candor and humor, Ahern traces the arc of her life in essays, starting with the feeling of "not good enough" which was sown in a traumatic childhood and dogged her well into adulthood. She writes about finding her rage, which led her to find her enduring motto: enough pretending. And she chronicles how these phases have opened the door to living more joyfully today with mostly enough: friends, family, and her community.

Readers will be moved by Ahern's brave stories. They will also find themselves in these essays, since we all have to find our own definition of enough.

Shauna M. Ahern: SHAUNA M. AHERN is a James Beard Award-winning author of four acclaimed cookbooks, including Gluten-Free Girl Every Day. A personal essayist at heart, her work has been published or recognized by the New York Times, Bon Appétit, the Guardian, and the Washington Post. She lives on a rural island outside of Seattle with her husband and two children.