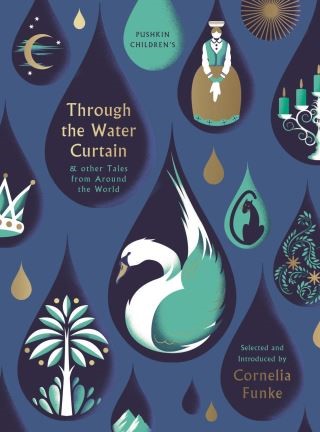 Through the Water Curtain

A delightful, diverse selection of fairy tales from around the world by one of our most beloved children's writers.

GOLD FOIL AND OTHER SPECIAL EFFECTS MAKE FOR A RICH, GIFTY PAPER-OVER-BOARDS COVER

International bestselling children's author Cornelia Funke has long been inspired and fascinated by fairy tales. This wonderful anthology is Funke's personal selection of fairy tales from all around the world - not just from her native Germany but from Russia, Japan and the Native American tradition. It's the perfect Christmas gift for any young reader wishing to discover the wider world of fairy tales.

This wonderful selection of 13 tales includes:

•  The Tale of the Firebird (Russia)
•  The Boy Who Drew Cats (Japan)
•  The Frog Princess (Ukraine)
•  The Six Swans (Germany)
•  The Girl Who Gave a Knight a Kiss out of Necessity (Sweden)
•  Kotura, Lord of the Winds (Siberia)<

Cornelia Funke: Cornelia Funke is one of the best selling children's writers in the world. Her books have sold tens of millions of copies, and they include the Inkheart trilogy, Dragon Rider, The Thief Lord and the Reckless series. Cornelia has long been inspired by fairy tales from around the world.