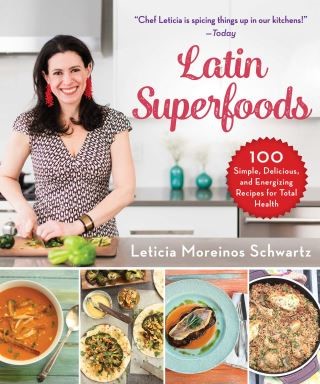 Most people associate healthy cooking with boring taste and flavorless foods, but Leticia is on a mission to prove that healthy eating not only can be absolutely delicious, but also that food is medicine, and that by living a healthy lifestyle you can take control of your health and of your life.

Through the American Diabetes Campaign, Leticia sees first-hand the dietary problems that contribute to this and many other lifestyle diseases, particularly in the Hispanic community here in the US and in Latin countries globally. She quickly realized that once Latinos move to the US, their habits change for the worse, along with their health. “We no longer shop at a farmers market or cook homemade meals. Instead, we shop at big chain stores and buy pre-packed foods. The road from a healthy Latin culture to the North American table became a tough one somewhere along the way.”

Utilizing healthful, nutritious ingredients like nuts, grains, seeds, herbs, spices, beans, fruits, and vegetables, these tried and true favorites include classics like arroz con pollo and quesadillas (with a healthy twist), to lesser-known (but still traditional) dishes like grilled shrimp with Caipirinha vinaigrette and wild rice salad with mango and shrimp.

The good news is that maintaining a healthy diet has never been easier, precisely because of the influence of the Latin culture in this country. Award-winning author Leticia Schwartz will introduce you to new and improved Latin recipes to enjoy without compromising on flavor!

Leticia Moreinos Schwartz: Leticia Moreinos Schwartz is a Brazilian-American chef who studied culinary and pastry arts at the French Culinary Institute, and who has worked at legendary New York restaurants such as Le Cirque 2000, La Grenouille, and La Caravelle. She is also the author of The Brazilian Kitchen which won Best Latin Cookbook at the World Gourmand Awards, and My Rio de Janeiro. Leticia has appeared on The Today Show, CBS Early Show, Fox Morning Show, ABC News, and local television. She was an NBC correspondent for the 2016 Summer Olympics in Rio.