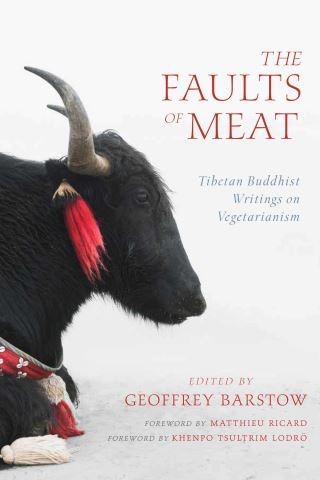 The Faults of Meat

Vegetarianism is a hotly debated topic within Buddhist circles. This book provides a valuable new contribution to the discussion with translations of thirteen Tibetan texts focused on the ethical problems associated with eating meat, coming from a wide variety of perspectives and lineages.

Should all Buddhists be vegetarian?

Vegetarianism is an important topic of debate in Buddhist circles—some argue that Buddhists should avoid meat entirely while others suggest that it is acceptable. For the most part, however, this ethical query has been conducted in the West without consulting traditional literature on the subject. The Faults of Meat brings together for the first time a collection of rich and intricate explorations of authoritative Tibetan views on eating meat. These fourteen nuanced texts, ranging from scholastic treatises to poetic verse, reveal vegetarianism as a significant, ongoing issue of debate for Tibetans across time and traditions, with a wide variety of voices marshaled against meat, and a few in favor. Authors include many important Tibetan teachers:

These Buddhist teachers recognize both the ethical problems that surround meat eating and the practical challenges of maintaining a vegetarian diet; their skilled arguments are illuminated further by the translators’ introductions to each work.

The perspectives in The Faults of Meat are strikingly relevant to our discussions of vegetarianism today; they introduce us to new approaches and solutions to a contentious issue for Buddhists.

Geoffrey Barstow: Geoffrey Barstow is an assistant professor in the School of History, Philosophy, and Religion at Oregon State University. He received his PhD in Buddhist studies from the University of Virginia and taught at Otterbein University before moving to Oregon. His current research focuses on the history and practice of vegetarianism in Tibet, including extensive textual research and field-based ethnographic work, primarily in Kham. He is the author of Food of Sinful Demons: Meat, Vegetarianism, and the Limits of Buddhism in Tibet (Columbia University Press, 2018).