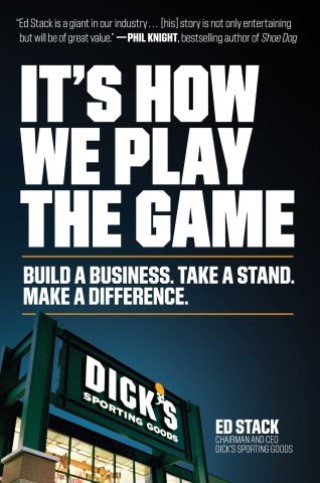 It's How We Play the Game

Build a Business. Take a Stand. Make a Difference.

An inspiring memoir from the CEO of DICK’s Sporting Goods that is “not only entertaining but will be of great value to any entrepreneur” (Phil Knight, New York Times bestselling author of Shoe Dog), this book shows how a trailblazing business was created by giving back to the community and by taking principled, and sometimes controversial, stands—including against the type of weapons that are too often used in mass shootings and other tragedies.

It’s How We Play the Game tells the story of a complicated founder and an ambitious son—one who transformed a business by making it about more than business, conceiving it as a force for good in the communities it serves. In 1948, Ed Stack’s father started Dick’s Bait and Tackle in Binghamton, New York. Ed Stack bought the business from his father in 1984, and grew it into the largest sporting goods retailer in the country, with 800 locations and close to $9 billion in sales. The transformation Ed wrought wasn’t easy: economic headwinds nearly toppled the chain twice. But DICK’s support for embattled youth sports programs earned the stores surprising loyalty, and the company won even more attention when, in the wake of yet another school shooting—at Marjory Stoneman Douglas High School in Parkland, Florida—it chose to become the first major retailer to pull all semi-automatic weapons from its shelves, raise the age of gun purchase to twenty-one, and, most strikingly, destroy the assault-style-type rifles then in its inventory.

With vital lessons for anyone running a business and eye-opening reflections about what a company owes the people it serves, It’s How We Play the Game is “a compelling narrative…In a genre that can frequently be staid, Mr. Stack’s corporate biography is deeply personal…[Features] surprising openness [and] interesting and humorous anecdotes” (Pittsburgh Post-Gazette).

Ed Stack: Ed Stack is the Chairman and CEO of DICK’s Sporting Goods. Born in Binghamton, New York, he now lives in Pittsburgh, Pennsylvania with his wife, Donna. It’s How We Play the Game is his first book.