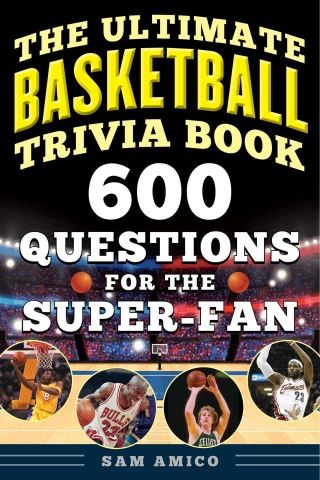 600 Questions for the Super-Fan

Test yourself and your friends! Fans of the Warriors Raptors, Lakers, Celtics, the UNC Tar Heels, Duke Blue Devils, UCLA Bruins, Kentucky Wildcats, and every other great pro or college team will be puzzled, challenged, and amused by these questions and answers about the NBA, NCAA, WNBA, and everything in between.

In this collection of 600 questions, Sam Amico tests your level of expertise on all things basketball. Every era of basketball history is represented, from Bob Cousy to Chris Paul, Moses Malone to Joel Embiid, Michael Jordan to LeBron James, Wilt Chamberlain to Shaquille O’Neal ,and everyone in between. Some of the many questions that Amico poses include:

From the Celtics dynasty to the most exciting Final Four games of all time, from Magic Johnson and Larry Bird to Stephen Curry and James Harden, here is the definitive test for knowledgeable basketball fans!

Sam Amico: Sam Amico is a former NBA reporter for FOX Sports and Cleveland Cavaliers beat writer for FOX Sports Ohio. His coverage of the league has appeared in the New York Post, Boston Herald, and USA Today. He currently runs AmicoHoops.net and lives in Medina, Ohio, with his wife Katie and their three sons.