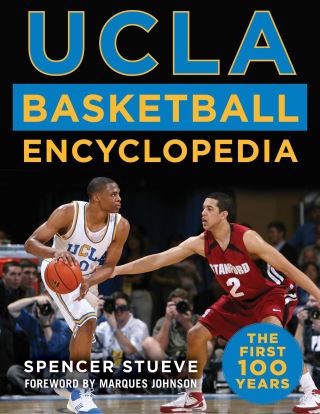 A complete history of a century of UCLA Basketball!

Over the course of one hundred years, UCLA has proven to be arguably the top college basketball program of all time, but the rise to the top was filled with many bumps in the road. In UCLA Basketball Encyclopedia, Spencer Stueve writes in detail about each season in the team’s epic history.

While Coach John Wooden built a program that won more championships than any other in America, not all of UCLA’s basketball history is about winning titles. Prior to Coach Wooden’s arrival, UCLA was one of the worst programs in America, and since his departure, UCLA has been on a never-ending search for the man to bring them back to the top. Stueve leaves no stone unturned in this comprehensive volume, describing the many highs and lows the team has encountered along the way.

Readers will learn about the life of Lewis Alcindor (who changed his name to Kareem Abdul-Jabbar), the dark days of Bill Walton and how he came back to life, and many other legendary players whose accomplishments have often been overshadowed, players like Gail Goodrich and Walt Hazzard.

With a comprehensive all-time roster to accompany the text, this book is the perfect gift for any Bruins basketball fan!

Marques Johnson is an Emmy Award-winning TV analyst for the Milwaukee Bucks. Johnson was an All-American small forward at UCLA, where he received the first ever John R. Wooden Award and had his number retired. He went on to spend seven seasons with the Bucks before finishing his NBA career with the Los Angeles Clippers and the Golden State Warriors. Johnson resides in Milwaukee, Wisconsin.