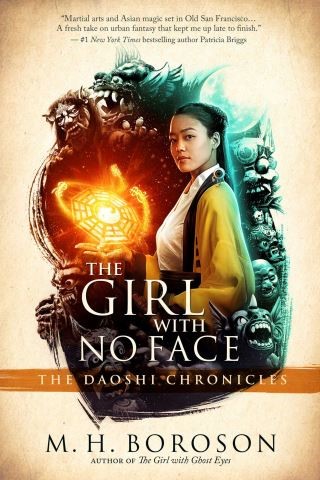 The Girl with No Face

The adventures of Li-lin, a Daoist priestess with the unique ability to see the spirit world, continue in the thrilling follow-up to the critically-acclaimed historical urban fantasy The Girl with Ghost Eyes.

It’s the end of the Nineteenth Century. San Francisco’s cobblestone streets are haunted, but Chinatown has an unlikely protector in a young Daoist priestess named Li-lin. Using only her martial arts training, spiritual magic, a sword made from peachwood, and the walking, talking spirit of a human eye, Li-lin stands alone to defend her immigrant community from supernatural threats.

But when the body of a young girl is brought to the deadhouse Li-lin oversees for a local group of gangsters, she faces her most bewildering—and potentially dangerous—assignment yet. The nine-year-old has died from suffocation . . . specifically by flowers growing out of her nose and mouth. Li-lin suspects Gong Tau, a dirty and primitive form of dark magic. But who is behind the spell, and why, will take her on a perilous journey deep into a dangerous world of ghosts and spirits.

With hard historical realism and meticulously researched depictions of Chinese monsters and magic that have never been written about in the English language, The Girl with No Face draws from the action-packed cinema of Hong Kong to create a compelling and unforgettable tale of historical fantasy and Chinese lore.

M. H. Boroson: M. H. Boroson was obsessed with two things as a young man: Buffy the Vampire Slayer and kung fu movies. He has studied Chinese religion at Naropa University and the University of Colorado and now lives in Denver, Colorado, with his wife and three cats. The Girl with No Face is his second novel, following The Girl with Ghost Eyes.