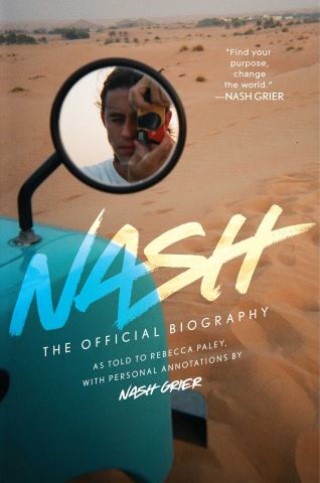 The first-ever book about Nash Grier, one of the biggest digital superstars in the world.

When he was still in high school, Nash Grier had no idea his life was about to change—forever. With the launch of the popular Vine app came the beginning of Nash’s career as a viral social media sensation. Now, in his official biography, the twenty-one-year-old digital media phenomenon shares never-before-told stories about life behind the camera. From growing up as a regular kid in North Carolina, to finding his calling as a top social media tastemaker, to landing leading roles in major feature films, to being a millennial ambassador for top brands, to using his platform to promote change, to leaning on the love and support from his fan base when the going gets tough, this is the story of a how Nash found his voice—and how readers can find their own.

Nash Grier: Nash Grier is is a twenty-one-year-old social media phenomenon with more than 25 million followers and 3.2 billion views across platforms. Grier started his journey to worldwide celebrity by creating videos on the popular social media network Vine. From there, he has amassed huge followings on YouTube, Instagram, Twitter, Facebook, and Snapchat. As an actor, his credits include You Get Me, Air Bound, The Deleted, The Outfield, High School Cupid, and Gnome Alone. Hailing from North Carolina, Grier now lives in Los Angeles.