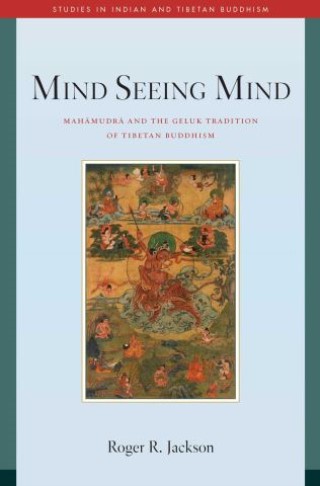 Mahamudra and the Geluk Tradition of Tibetan Buddhism

A definitive study of one of the most important practices in Tibetan Buddhism, with translations of a number of its key texts.

Mahamudra, the “great seal,” refers to the ultimate nature of mind and reality, to a meditative practice for realizing that ultimate reality, and to the final fruition of buddhahood. It is especially prominent in the Kagyü tradition of Tibetan Buddhism, so it sometimes comes as a surprise that mahamudra has played an important role in the Geluk school, where it is part of a special transmission received in a vision by the tradition’s founder, Tsongkhapa. Mahamudra is a significant component of Geluk ritual and meditative life, widely studied and taught by contemporary masters such as the Dalai Lama.
Roger Jackson’s Mind Seeing Mind offers us both a definitive scholarly study of the history, texts, and doctrines of Geluk mahamudra and masterful translations of its seminal texts. It provides a skillful survey of the Indian sources of the teaching, illuminates the place of mahamudra among Tibetan Buddhist schools, and details the history and major textual sources of Geluk mahamudra. Jackson also addresses critical questions, such as the relation between Geluk and Kagyü mahamudra, and places mahamudra in the context of contemporary religious studies. The translation portion of Mind Seeing Mind includes ten texts on mahamudra history, ritual, and practice. Among these are the First Panchen Lama’s root verses and autocommentary on mahamudra meditation, his ritual masterpiece Offering to the Guru, and a selection of his songs of spiritual experience.
Mind Seeing Mind adds considerably to our understanding of Tibetan Buddhist spirituality and shows how mahamudra came to be woven throughout the fabric of the Geluk tradition.

Roger R. Jackson: Roger R. Jackson is John W. Nason Professor of Asian Studies and Religion, emeritus, at Carleton College, where for nearly three decades he taught the religions of South Asia and Tibet. He has also taught at the University of Michigan, Fairfield University, McGill University, and Maitripa College. He has a BA from Wesleyan University and an MA and PhD from the University of Wisconsin, where he studied under Geshe Lhundub Sopa. He maintains a scholarly interest in Indian and Tibetan Buddhist systems of philosophy, meditation, and ritual; Buddhist and other types of religious poetry; the study of mysticism; and the contours of modern Buddhist thought. His books include The Wheel of Time: Kalachakra in Context (with Geshe Sopa and John Newman, 1985), Is Enlightenment Possible? (1993), Tibetan Literature (with José Cabezón, 1996), Buddhist Theology (with John Makransky, 1999), Tantric Treasures (2004), The Crystal Mirror of Philosophical Systems (with Geshe Sopa et al., 2009), and Mahamudra and the Bka' brgyud Tradition (with Matthew Kapstein, 2011). He has written dozens of articles, book chapters, and reviews and has presented regularly at national and international scholarly conferences. He was editor-in-chief of the Journal of the International Association of Buddhist Studies from 1985 to 1993 and served as coeditor of the Indian International Journal of Buddhist Studies from 2006 to 2018.