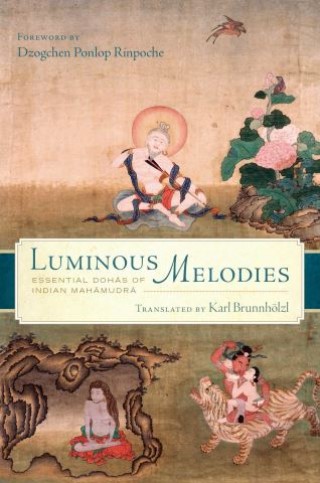 Presented here for the first time in English is a collection of dohas, or songs of realization, carefully and thoughtfully selected and translated from the large compendium the Indian Texts of the Mahamudra of Definitive Meaning, which was compiled by the Seventh Karmapa and drawn primarily from the Tengyur.

Beautiful, profound, and often outrageous, these verses were frequently composed spontaneously and thus have a moving sense of freedom, openness, and bliss. They range from summaries of the entire path of Mahamudra to pithy four-liners that point directly to the buddha within us. The authors include famous masters such as Saraha and Naropa, dakinis, kings, and also courtesans and cobblers—showing that realization is accessible to all of us, right here in our lives.

Karl Brunnhölzl: Karl Brunnhölzl, MD, PhD, was originally trained as a physician. He received his systematic training in Tibetan language and Buddhist philosophy and practice at the Marpa Institute for Translators, founded by Khenpo Tsultrim Gyamtso Rinpoche, as well as the Nitartha Institute, founded by Dzogchen Ponlop Rinpoche. Since 1989 he has been a translator and interpreter from Tibetan and English. Karl Brunnhölzl is a senior teacher and translator in the Nalandabodhi community of Dzogchen Ponlop Rinpoche, as well as at the Nitartha Institute. He lives in Seattle and is the author and translator of numerous texts, including A Lullaby to Awaken the Heart: The Aspiration Prayer of Samantabhadra and Its Tibetan Commentaries.