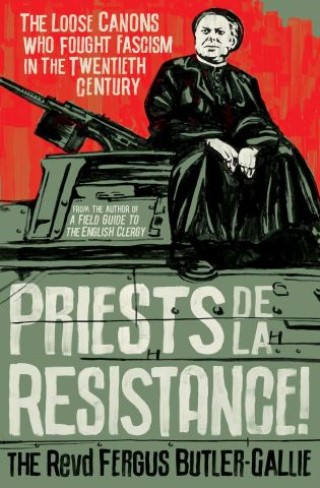 The loose canons who fought Fascism in the twentieth century

Whoever said that Christians had to be meek and mild hadn’t met Father Kir – parish priest and French resistance hero, immortalised by the Kir Royale. And they probably weren’t thinking of Archbishop Damaskinos who, when threatened with the firing squad by the Nazis, replied, ‘Please respect our traditions – in Greece we hang our Archbishops.’

Wherever fascism has taken root, it has met with resistance. From taking a bullet for a frightened schoolgirl in Alabama to riding on the bonnet of a tank during the liberation of France, each of the hard-drinking, chain-smoking clerics featured in Priests de la Résistance were willing to give their lives for a world they believed in – even as their superiors beckoned them to safety.

In this spellbinding new collection, the Reverend Fergus Butler-Gallie, bestselling author of A Field Guide to the English Clergy, presents fifteen men and women who dared to stand up to fascism, proving that some hearts will never be conquered.

The Revd Fergus Butler-Gallie: The Reverend Fergus Butler-Gallie is Assistant Curate at Liverpool Parish Church and the author of A Field Guide to the English Clergy, a Best Book of the Year for The Times, Mail on Sunday and BBC History. He holds a bachelor’s degree in history from the University of Oxford and a bachelor’s degree in theology from the University of Cambridge. He once accidentally appeared on Only Connect. This is his second book.