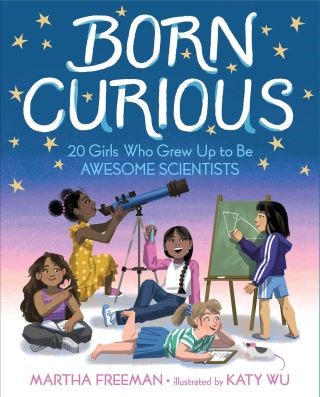 20 Girls Who Grew Up to Be Awesome Scientists

Why do galaxies spin the way they do?
What’s the best kind of house for a Komodo dragon?
Can you cure malaria with medicine made from a plant?

The scientists and mathematicians in Born Curious sought answers to these and many other fascinating questions. And it’s lucky for us they did. Without their vision, insight, and hard work, the world would be a sicker, dirtier, and more dangerous place.

The twenty groundbreaking women—including Rosalind Franklin, Marie Tharp, Shirley Anne Jackson, and more—came from all kinds of backgrounds and had all kinds of life experiences. Some grew up rich. Some grew up poor. Some were always the smartest kid in class. Some struggled to do well in school. But all had one thing in common: They were born curious. Are you curious, too? Read on.

Martha Freeman: Martha Freeman worked as a reporter and teacher before becoming a full-time writer of books for young readers, including the Edgar Award­–nominated Zap!, The Secret Cookie Club series, Who Stole Halloween?, and Effie Starr Zook Has One More Question, which School Library Journal called “accessible and exciting” in a starred review. She also collaborated with NASA astronaut Mark Kelly on the Astrotwins books. Martha lives in Colorado. Learn more at MarthaFreeman.comKaty Wu has worked in the animated feature film industry as a sketch artist and assistant art director, as well as in the tech industry as a “Doodler” for Google (creating the artwork and short films showcased on Google’s landing page), where she created the Google “Doodles” for Nellie Bly and Nelson Mandela. Katy currently works as a freelance art director and designer on various animation projects. She has illustrated many nonfiction books for young readers, including Dumpling Dreams by Carrie Clickard and Born Curious by Martha Freeman. Learn more at KatyCWWU.Tumblr.com.