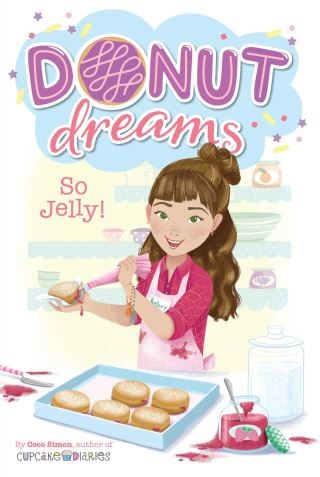 Kelsey learns to deal with jealousy in this second delicious book in the Donut Dreams series from the author of the Cupcake Diaries and Sprinkle Sundays series!

Everything’s better with a donut.

Happy-go-lucky Kelsey hasn’t been so happy-go-lucky lately. She’s starting to feel pretty jealous of her cousin Lindsay and all the extra time Lindsay is spending with her aunt, who just happens to be Kelsey’s mom. The worst part is it seems like Kelsey’s mom wants to spend time with Lindsay instead of her! But once Kelsey adds a pinch of patience to the batter, and Lindsay stirs in her own special brand of silly fun to the mix, Kelsey realizes she’s come up with the perfect recipe for spending time with her cousin and her mom. Kelsey discovers that the love she and her family have for one another is like a box of donuts—there’s always enough to share!

Coco Simon: From cupcakes to ice cream and donuts! Having written over thirty books about middle school girls and cupcakes and ice cream, Coco Simon decided it was time for a change; so she’s switched her focus from cupcakes to her third favorite sweet treat: donuts! When she’s not daydreaming about yummy snacks, Coco edits children’s books and has written close to one hundred books for children, tweens, and young adults, which is a lot less than the number of cupcakes, ice cream cones, and donuts she’s eaten. She is the author of the Cupcake Diaries, the Sprinkle Sundays, and the Donut Dreams series.