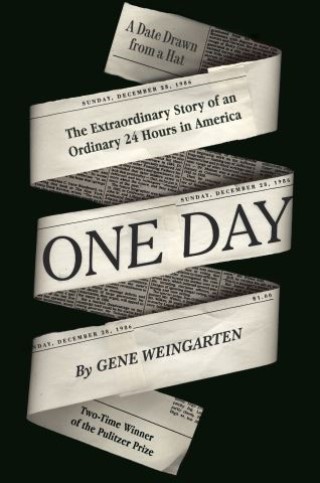 The Extraordinary Story of an Ordinary 24 Hours in America

On New Year’s Day 2013, two-time Pulitzer Prize–winner Gene Weingarten asked three strangers to, literally, pluck a day, month, and year from a hat. That day—chosen completely at random—turned out to be Sunday, December 28, 1986, by any conventional measure a most ordinary day. Weingarten spent the next six years proving that there is no such thing.

That Sunday between Christmas and New Year’s turned out to be filled with comedy, tragedy, implausible irony, cosmic comeuppances, kindness, cruelty, heroism, cowardice, genius, idiocy, prejudice, selflessness, coincidence, and startling moments of human connection, along with evocative foreshadowing of momentous events yet to come. Lives were lost. Lives were saved. Lives were altered in overwhelming ways. Many of these events never made it into the news; they were private dramas in the lives of private people. They were utterly compelling.

One Day asks and answers the question of whether there is even such a thing as “ordinary” when we are talking about how we all lurch and stumble our way through the daily, daunting challenge of being human.

Gene Weingarten: Gene Weingarten is a Washington Post journalist. He writes long-form stories as well as Below the Beltway, the weekly syndicated humor column. His previous books include I’m With Stupid: One Man. One Woman. 10,000 Years of Misunderstanding Between the Sexes Cleared Right Up (with Gina Barreca); The Hypochondriac’s Guide to Life. And Death; Old Dogs: Are the Best Dogs; and The Fiddler in the Subway, a collection of his best-known work. Weingarten is the only two-time winner of the Pulitzer Prize for feature writing, for examining the phenomenon of parents who accidentally leave their children to bake to death in hot cars, and for an experiment in which he arranged for famed violinist Joshua Bell to busk incognito outside a Metro station in Washington, to see if anyone would notice.

He lives in Washington, D.C.