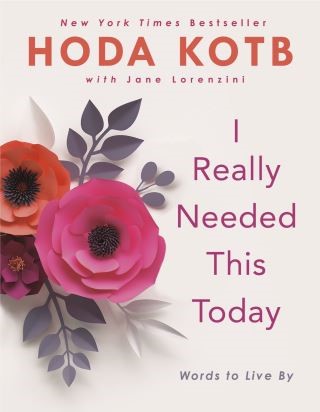 I Really Needed This Today

Words to Live By

Several years ago, Today show co-host Hoda Kotb began posting a variety of quotes on her Instagram page. Some were penned by a favorite writer; others offered a dose of love or laughter. She thought the quotes were meaningful only to her, but soon a funny thing started happening - reactions poured in from thousands of people who were just as moved. The quotes weren't only providing inspiration to Hoda, they were comforting and connecting people. So many of their comments read, "I really needed this today," a phrase that inspired the book's title.

In I Really Needed This Today, Hoda not only shares 365 sayings and quotes, she writes about the people and experiences that have pushed her to challenge boundaries, embrace change, and explore relationships to their fullest. Written with her signature wit and warmth, this book is the ideal companion to tuck beside your bed or to bring with you on-the-go to keep you motivated, recharged, and inspired each day.

Hoda Kotb: Hoda Kotb was named co-host of the fourth hour of Today in 2007 and co-anchor of the flagship hour in 2018. She has also been a Dateline NBC correspondent since 1998 and is a New York Times bestselling author for her books Hoda and Ten Years Later, as well as for her two children's books, I've Loved You Since Forever and You Are My Happy. The four-time Emmy winner has also been honored multiple times with the Alliance for Women in Media's Gracie Award (most recently in 2019), as well as with the 2006 Peabody Award and the 2002 Edward R. Murrow Award. She resides in New York City with her partner, Joel, and her daughters, Haley and Hope.