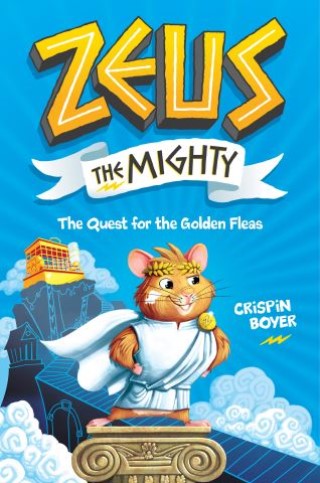 Zeus the Mighty: The Quest for the Golden Fleas (Book 1)

Greek mythology meets cute talking animals in this first adventure in a hilarious new middle grade fiction series, starring Zeus the mighty ... king of the gods ... ruler of minions ... HAMSTER, and the crazy crew of critters of the Mount Olympus Pet Center.

Welcome to the Mount Olympus Pet Center, which sits high on a hill in Athens ... Georgia. The owner, Artie, has a soft spot for animals that need a forever home, and she has rescued a menagerie of creatures, each named after a powerful god or goddess. But these animals aren't just pets with cool names ...

Meet Zeus, a tiny hamster with a mighty appetite for power. His cage sits atop a high shelf so he can watch the other pets from above. But being king of the gods is a tough job: You've got to issue orders and decrees, make sure to stay in tip-top shape by running on your exercise wheel, and most importantly, lead your minions on epic journeys. And Zeus the Mighty has one giant task in front of him: Find the "Golden Fleas" and solidify his position before the other gods rebel.

Get ready to laugh, cheer, and learn with this adorable and quirky cast of characters in their unforgettable first adventure -- a reimagining of the tale of the Golden Fleece.

Crispin Boyer: CRISPIN BOYER lives in Xcalak, a small fishing village in Mexico, where he writes about history, wildlife, and technology. He and his wife live with their flock of hens, a turkey, two roosters, and a guard goose.

His 2013 cover story for National Geographic Kids magazine, Return of the Missing Lynx, won an Eddie Award for Best Single Article, Youth/Teen. The American Library Association chose his book This or That? as one of 2015's top picks for reluctant young-adult readers.