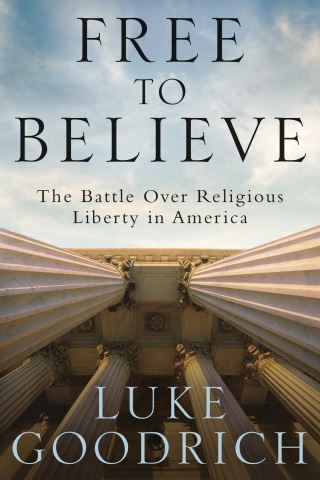 The Battle Over Religious Liberty in America

A leading religious freedom attorney, the veteran of several Supreme Court battles, helps people of faith understand religious liberty in our rapidly changing culture—why it matters, how it is threatened, and how to respond with confidence and grace.

THE GOSPEL COALITION'S BEST BOOK OF THE YEAR, PUBLIC THEOLOGY & CURRENT EVENTS • NAMED ONE OF THE BEST BOOKS OF THE YEAR BY WORLD MAGAZINE

Many Americans feel like their religious freedom is under attack. They see the culture changing around them, and they fear that their beliefs will soon be punished as a form of bigotry. Others think these fears are overblown and say Christians should stop complaining about imaginary persecution.

In Free to Believe leading religious freedom attorney Luke Goodrich challenges both sides of this debate, offering a fresh perspective on the most controversial religious freedom conflicts today. With penetrating insights on gay rights, abortion rights, Islam, and the public square, Goodrich argues that threats to religious freedom are real—but they might not be quite what you think.

As a lawyer at the Becket Fund for Religious Liberty, Goodrich has won several historic Supreme Court victories for clients such as the Little Sisters of the Poor and Hobby Lobby. Combining frontline experience with faithful attention to Scripture, Goodrich shows why religious freedom matters, how it is threatened, and how to protect it. The result is a groundbreaking book full of clear insight, practical wisdom, and refreshing hope for all people of faith.

Luke Goodrich: Luke Goodrich, religious freedom attorney at Becket, has won precedent-setting cases in courts across the country, including four cases in the Supreme Court. He appears frequently in the media to discuss religious freedom, including on Fox News, CNN, PBS, and in the New York Times, Los Angeles Times, and Washington Post. He teaches an advanced course in constitutional law at the University of Utah law school. Goodrich lives in Utah, where he enjoys exploring canyon country with his wife and seven children and serving as an elder in their local church.