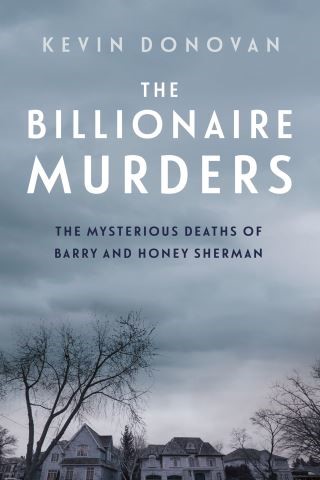 The Mysterious Deaths of Barry and Honey Sherman

A top journalist crosses the yellow tape to investigate a shocking high-society crime.

Billionaires, philanthropists, socialites . . . victims. Barry and Honey Sherman appeared to lead charmed lives. But the world was shocked in late 2017 when their bodies were found in a bizarre tableau in their elegant Toronto home. First described as murder-suicide — belts looped around their necks, they were found seated beside their basement swimming pool — police later ruled it a staged, targeted double murder. Nothing about the case made sense to friends of the founder of one of the world’s largest generic pharmaceutical firms and his wife, a powerhouse in Canada’s charity world. Together, their wealth has been estimated at well over $4.7 billion.

There was another side to the story. A strategic genius who built a large generic drug company — Apotex Inc. — Barry Sherman was a self-described workaholic, renowned risk-taker, and disruptor during his fifty-year career. Regarded as a generous friend by many, Sherman was also feared by others. He was criticized for stifling academic freedom and using the courts to win at all costs. Upset with building issues at his mansion, he sued and recouped millions from tradespeople. At the time of his death, Sherman had just won a decades-old legal case involving four cousins who wanted 20 percent of his fortune.

Toronto Star investigative journalist Kevin Donovan chronicles the unsettling story from the beginning, interviewing family members, friends, and colleagues, and sheds new light on the Shermans’ lives and the disturbing double murder. Deeply researched and authoritative, The Billionaire Murders is a compulsively readable tale of a strange and perplexing crime.

Kevin Donovan: KEVIN DONOVAN is the Chief Investigative Reporter for the Toronto Star, where he has worked for more than three decades. He has won three National Newspaper Awards, two Michener Awards, and three Canadian Association of Journalists Awards.