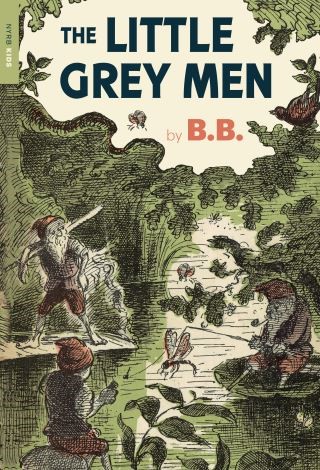 By a recipient of the Carnegie Medal for British children's books, a whimsical classic featuring talking gnomes and magical woods that will appeal to fans of The Wind in the Willows.

"This is a story about the last gnomes in Britain. They are honest-to-goodness gnomes, none of your baby, fairy-book tinsel stuff, and they live by hunting and fishing, like the animals and birds, which is only proper and right." --From the author's introduction

On the banks of the Folly Brook, inside an old oak tree, live the last three gnomes in Britain: Sneezewort, Baldmoney, and Dodder. Before their fourth brother, Cloudberry, disappeared upstream seeking adventure, they lived happily and peacefully among their woodland friends. But now spring has come and the brothers start thinking about spending the summer traveling upstream to find Cloudberry. Before long they've built a boat and set off for unknown lands, where they find themselves involved in all kinds of adventures with new friends (wood mice, water voles, badgers) as well as with enemies (two-legged giants). A classic of British literature, BB's The Little Grey Men has much in common with Kenneth Grahame's The Wind in the Willows, though as BB acknowledges in his introduction, the talking gnomes are only part of the story. The true plot, which BB, an unparalleled naturalist, brings thrillingly to life is the magic of the woods and streams, the beauty of unspoiled nature and of the great diversity of living things.

B.B.: BB (1905-1990) is the pseudonym for the British naturalist, illustrator, and children's author Denys James Watkins-Pitchford. In 1924, Watkins-Pitchford started studying at the Royal College of Art in London, and in 1930 he began working as an assistant art master at Rugby School and contributing to the Shooting Times as an illustrator and a writer. It was during this time that he adopted his nom de plume, BB, which was based on the size of the shot he used when hunting geese. In 1942, he won the Carnegie Medal for British children's books. In 1986, he was awarded an honorary MA by Leicester University and in 1990 was made a Member of the Order of the British Empire. BB followed The Little Grey Men with a sequel, Down the Bright Stream.