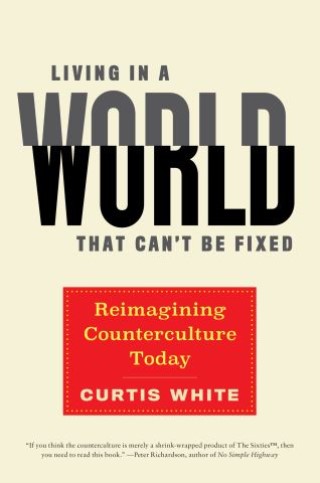 Living in a World that Can't Be Fixed

So begins Curtis White’s thrilling call for the revitalization of counterculture today.

The problem, White argues, is twofold: first, most of us think of counterculture as a phenomenon stuck in the 1960s, and, second, what passes as counterculture today . . . simply isn’t. Nevertheless, a reimagined counterculture is our best hope to save the planet, bypass social antagonisms, and create the world we actually want to live in. Now.

White—“the most inspiringly wicked social critic of the moment" (Will Blythe, Elle)—shows how the products of our so-called resistance, from Ken Burns to Black Panther, rarely offer a meaningful challenge to power, and how our loyalty to the “American Lifestyle” is self-defeating and keeps us from making any real social change.

The result is an inspiring case for practicing civil disobedience as a way of life, and a clear vision for a better world—full of play, caring, and human connection.

Curtis White: Curtis White is a novelist and social critic whose works include Memories of My Father Watching TV, The Middle Mind, and, most recently, The Science Delusion, We, Robots, and Lacking Character. He is the founder (with Ronald Sukenick) of FC2, a publisher of innovative fiction run collectively by its authors. He lives in Port Townsend, WA.