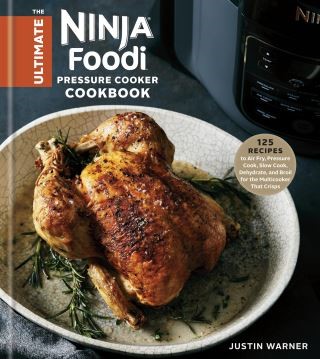 125 Recipes to Air Fry, Pressure Cook, Slow Cook, Dehydrate, and Broil for the Multicooker That Crisps

It's a multicooker--it's an air fryer--it even has a built-in crisping element! Welcome to your newest all-in-one cooking appliance obsession, the Ninja Foodi. This officially licensed book is the ultimate guide to cooking with the Foodi--with 125 recipes from Food Network celebrity chef Justin Warner who helped test and design the appliance along with full color photos.

Finally, a one-step countertop cooking appliance that truly does it all. The 125 recipes in the Foodi cookbook offer air-frying, pressure-cooking, and slow-cook recipes from breakfast through dinner. Approachable and friendly, you'll find guidance for making air-fried French toast sticks as well as perfect Japanese-style omelets; golden-brown and crisp-topped macaroni and cheese; miso-glazed cod; Singapore-style mei fun; crispy-fried chicken wings; taquitos; and even crème brûlée! Eclectic, worldly, and easy enough for every day, The Ultimate Ninja Foodi Cookbook offers something for everyone.

Justin Warner: JUSTIN WARNER is the winner of the eighth season of Food Network Star, author of the cookbook The Laws of Cooking and How to Break Them, and the former chef/co-owner of Michelin-starred Do or Dine restaurant in Brooklyn, New York. His first Food Network appearance was on 24 Hour Restaurant Battle in 2010, which he won. He continues to be a frequent guest on Food Network shows like Guy's Grocery Games and hosts Foodie Call, a new Food Network web series, as well as Marvel Eat the Universe, a digital series for Marvel.