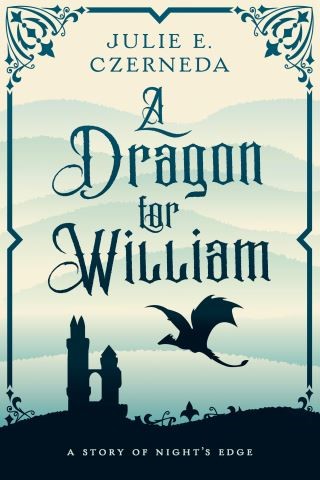 A Dragon for William

Set after the Aurora Award-winning novel, A Play of Shadow, this novella explores the story of a young boy whose fanciful tales of dragons and dangers may prove to be more than just fiction.

Werfol returns to Vorkoun with his family to find their fortunes changed for the worse. His father is in disgrace and banished from court. Meanwhile, Vorkoun has been ceded to Asnor by the prince's treaty and no one knows what that will mean.

And to complicate matters further, Werfol is now a truthseer, able to discern if another is lying. His training has barely begun, but his mother refuses to send him back to his uncle in Marrowdell. Werfol, bored and heartsick, retreats to his imagination, secretly writing a story about a brave boy who befriends a young dragon. In their adventures, “Prince William” is always the hero but, in real life, Werfol grows angrier and more afraid every day.

It doesn’t help that Werfol's brother Semyn, once his closest confidant, can’t remember Marrowdell’s magic. Then Semyn, worried about Werfol, finds his story and shows their parents. Their mother, plagued by dangerous dreams, fears her son may become a doorway to a threat far more dangerous than a treaty.

For Werfol wrote of a dragon the colour of a Sei, a being so potent its curiosity once tore apart worlds. Suddenly, no one, not even Werfol, can be sure where his imagination ends and the magical Verge begins.

Can a boy who sees the lies in others find the truth within himself?

Julie E. Czerneda: Julie E. Czerneda is the author of the Species Imperative trilogy, the Night's Edge fantasy duology, and the Stratification novels. She is a multiple Aurora Award winner, and was a finalist for the John W. Campbell Award and the Philip K. Dick Award.