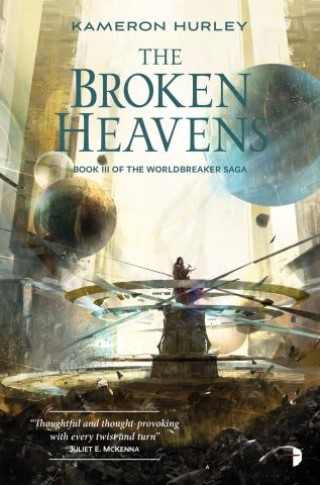 The Dhai nation has broken apart under the onslaught of the Tai Kao, invaders from a parallel world. With the Dhai in retreat, Kirana, leader of the Tai Kao, establishes a base in Oma’s temple and instructs her astrologers to discover how they can use the ancient holy place to close the way between worlds. With all the connected worlds ravaged by war and Oma failing, only one world can survive. Who will be sacrificed, and what will the desperate people of these worlds do to protect themselves?

Kameron Hurley: Kameron Hurley is an award-winning author and advertising copywriter. Her essay on the history of women in conflict “We Have Always Fought” was the first blog post to win a Hugo Award. It was also nominated for Best Non-Fiction work by the British Fantasy Society. Hurley is the author of God’s War, Infidel, and Rapture, a science-fantasy noir series which earned her the Sydney J. Bounds Award for Best Newcomer and the Kitschy Award for Best Debut Novel.

She has won the Hugo Award twice, and been a finalist for the Arthur C. Clarke Award, Nebula Award, the Locus Award and the BSFA Award for Best Novel. Additionally, her work has been included on the Tiptree Award Honor List and been long-listed for the Gemmell Morningstar Award.Her work has been translated into Romanian, Swedish, German, Hebrew, Chinese, Spanish and Russian. She is also a graduate of Clarion West, and writes regular columns for Locus Magazine.
Hurley currently lives in Ohio, where she’s cultivating an urban homestead.