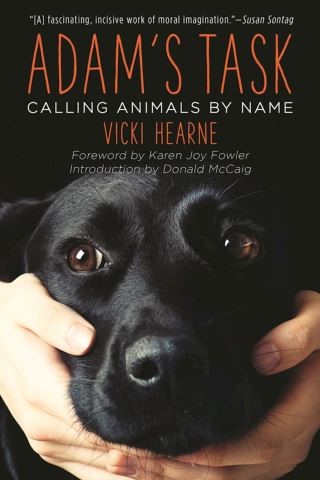 A groundbreaking exploration of the enduring bond between humans and their animal companions.

Audubon magazine named Adam’s Task one of the thirteen most significant nature books published in the last hundred years, and Susan Sontag hailed it as a “fascinating, incisive work of moral imagination.” Vicki Hearne’s innovative masterpiece on animal training brings our perennial discussion of the human-animal relationship to a whole new level.

Based on her studies of literary criticism and philosophy, as well as extensive hands-on experience in training, Hearne believes that animals are far more intelligent than we assume. In fact, they are capable of developing an understanding of “the good,” a moral code that influences their motives and actions. Drawing on an eclectic range of influences—Nietzsche, T. S. Eliot, Disney animal trainer William Koehler, and the Biblical Book of Genesis, among others—Hearne brilliantly interweaves personal anecdotes with philosophical meditations. The end result is an entirely new system of animal training that contradicts modern animal behavioral research and that, as her examples show, is astonishingly effective.

“There is no finer book than this one about the way language entwines humans and animals.” — Audubon magazine

“When Ms. Hearne relates a dog or horse story, the animals become full-fledged characters, as brightly delineated as people created by Dickens or Twain.” —The New York Times