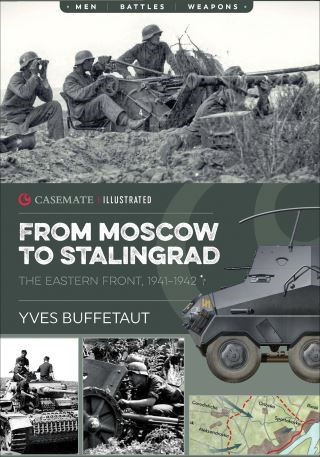 From Moscow to Stalingrad

An account of the most crucial period of fighting on the Eastern Front, from the defeat of Germany at the gates of Moscow to their crushing loss at Stalingrad.

The path from Moscow to Stalingrad was littered with successes and losses for both the Red Army and the Wehrmacht, culminating in one of the harshest battles of the Second World War. Part of the Casemate Illustrated series, this volume outlines how it was that, less than a year after their defeat at Moscow, the German army had found a way to make the Soviet troops waver in their defense, with their persistence eventually leading to the Battle of Stalingrad.

The successful expulsion of the German troops from Moscow in the winter of 1941 came at a cost for the Red Army. Weaknesses in the Soviet camp inspired the Wehrmacht, under Adolf Hitler’s close supervision, to make preparations for offensives along the Eastern Front to push the Russians further and further back into their territory. With a complex set of new tactics and the crucial aid of the Luftwaffe, the German army began to formulate a deadly two-pronged attack on Stalingrad to reduce the city to rubble.

In the lead-up to this, Timoshenko’s failed attack on Kharkov, followed by the Battle of Sebastopol in June 1942, prompted Operation Blue, the German campaign to advance east on their prized objective. This volume includes numerous photographs of the ships, planes, tanks, trucks, and weaponry used by both sides in battle, alongside detailed maps and text outlining the constantly changing strategies of the armies as events unfolded.