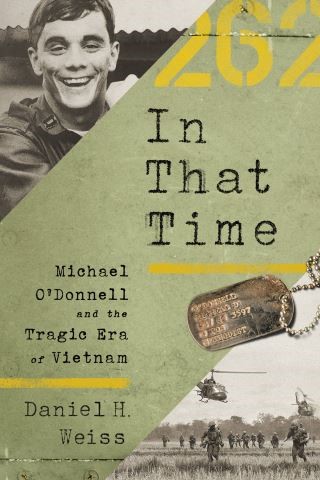 Michael O'Donnell and the Tragic Era of Vietnam

Through the story of the brief, brave life of a promising poet, the president and CEO of New York's Metropolitan Museum of Art evokes the turmoil and tragedy of the Vietnam War era.

In That Time tells the story of the American experience in Vietnam through the life of Michael O'Donnell, a bright young musician and poet who served as a soldier and helicopter pilot. O'Donnell wrote with great sensitivity and poetic force, and his best-known poem is among the most beloved of the war. In 1970, during an attempt to rescue fellow soldiers stranded under heavy fire, O'Donnell's helicopter was shot down in the jungles of Cambodia. He remained missing in action for almost three decades.

Although he never fired a shot in Vietnam, O'Donnell served in one of the most dangerous roles of the war, all the while using poetry to express his inner feelings and to reflect on the tragedy that was unfolding around him. O'Donnell's life is both a powerful, personal story and a compelling, universal one about how America lost its way in the 1960s, but also how hope can flower in the margins of even the darkest chapters of the American story.