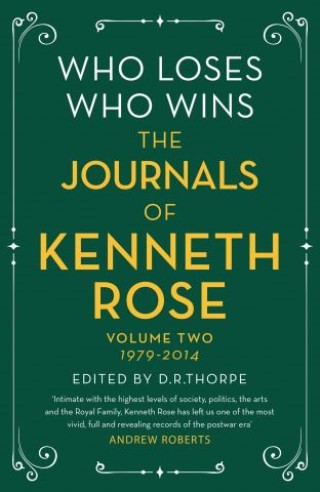 Who Loses, Who Wins: The Journals of Kenneth Rose

Kenneth Rose was one of the most astute observers of the post-war Establishment. The wry and amusing journals of the royal biographer and historian made objective observation a sculpted craft.

His impeccable social placement located him within the beating heart of the national elite for decades. He was capable of writing substantial history, such as his priceless material on the abdication crisis from conversations with both the Duke of Windsor and the Queen Mother. Yet he maintained sufficient distance to achieve impartial documentation while working among political, clerical, military, literary and aristocratic circles. Relentless observation and a self-confessed difficulty 'to let a good story pass me by' made Rose a legendary social commentator, while his impressive breadth of interests was underpinned by tremendous respect for the subjects of his enquiry.

Brilliantly equipped as Rose was to witness, detail and report, the second volume of his journals vividly portrays some of the most important events and people of the last century, from the election of Margaret Thatcher as Prime Minister in 1979 to Kenneth Rose's death in 2014.