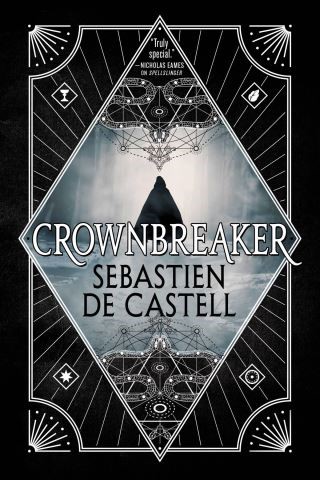 A failed mage learns that just because he's not the chosen one it doesn't mean he can't be a hero in final book of the Spellslinger series.
Once an outlaw spellslinger, Kellen Argos has made a life for himself as the Daroman Queen's protector. A little magic and a handful of tricks are all it takes to deal with the constant threats to her reign. But when rumors of an empire-shattering war begin to stir, Kellen is asked to commit an unimaginable act to protect his queen.
Inside enemy territory, he quickly realizes something is amiss. Someone is playing a dangerous game. And to discover their secrets, Kellen will have to challenge the greatest spellcaster who's ever lived.
Kellen's misadventures concludes in Crownbreaker, the riveting finale to the adventure fantasy series that began with Spellslinger.
Spellslinger Series
Spellslinger
Shadowblack
Charmcaster
Soulbinder
Queenslayer
Crownbreaker
For more from Sebastien de Castell, check out:
The Greatcoats Quartet
Traitor's Blade
Saint's Blood
Knight's Shadow
Tyrant's Throne