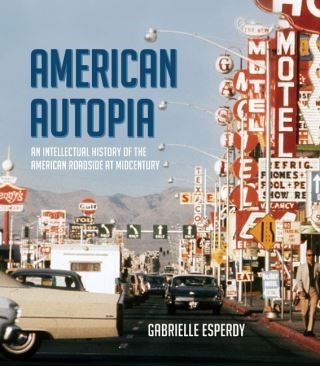 An Intellectual History of the American Roadside at Midcentury

Early to mid-twentieth-century America was the heyday of a car culture that has been called an "automobile utopia." In American Autopia, Gabrielle Esperdy examines how the automobile influenced architectural and urban discourse in the United States from the earliest days of the auto industry to the aftermath of the 1970s oil crisis. Paying particular attention to developments after World War II, Esperdy creates a narrative that extends from U.S. Routes 1 and 66 to the Las Vegas Strip to California freeways, with stops at gas stations, diners, main drags, shopping centers, and parking lots along the way.

While it addresses the development of auto-oriented landscapes and infrastructures, American Autopia is not a conventional history, offering instead an exploration of the wide-ranging evolution of car-centric territories and drive-in typologies, looking at how they were scrutinized by diverse cultural observers in the middle of the twentieth century.

Drawing on work published in the popular and professional press, and generously illustrated with evocative images, the book shows how figures as diverse as designer Victor Gruen, geographer Jean Gottmann, theorist Denise Scott Brown, critic J.B. Jackson, and historian Reyner Banham constructed "autopia" as a place and an idea. The result is an intellectual history and interpretive roadmap to the United States of the Automobile.