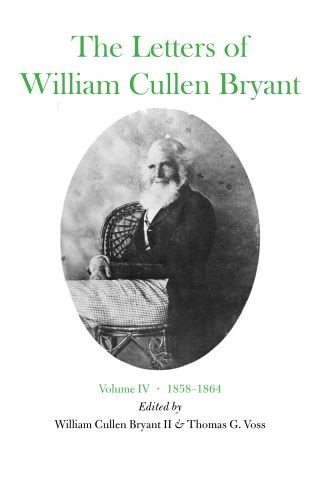 The Letters of William Cullen Bryant

The years just before and during the Civil War marked the high point of Bryant's influence on public affairs, which had grown steadily since the Evening Post had upheld the democratic Jacksonian revolution of the 1830s. A founder of the Free Soil Party in 1848 and the Republican Party in 1856, Bryant was lauded in 1857 by Virginia anti-slavery leader John Curtis Underwood, who wrote to Eli Thayer, "What a glory it would be to our country if it could elect this man to the Presidency-the country not he would be honored & elevated by such an event."

In 1860 Bryant helped secure the Presidential nomination for Abraham Lincoln, and was instrumental in the choice of two key members of his cabinet, Salmon Chase as Secretary of the Treasury, and Gideon Welles as Secretary of the Navy. During disheartening delays and defeats in the early war years, direct communications from Union field commanders empowered his editorial admonitions to such a degree that the conductor of a national magazine concluded that the Evening Post's "clear and able political leaders have been of more service to the government of this war than some of its armies."

Bryant's correspondence with statesmen further reflects the immediacy of his concern with military and political decisions. There are thirty-five known letters to Lincoln, and thirty-two to Chase, Welles, war secretary Stanton, and Senators Fessenden, Morgan, and Sumner.

This seven-year passage in Bryant's life, beginning with his wife's critical illness at Naples in 1858, concludes with a unique testimonial for his seventieth birthday in November 1864. The country's leading artists and writers entertained him at a "Festival" in New York's Century Club, giving him a portfolio of pictures by forty-six painters as a token of the "sympathy" he had "ever manifested toward the Artists," and the "high rank" he had "ever accorded to art." Poets Emerson, Holmes, Longfellow, Lowell, and Whittier saluted him in prose and verse. Emerson saw him as "a true painter of the face of this country"; Holmes, as the "first sweet singer in the cage of our close-woven life." To Whittier, his personal and public life sounded "his noblest strain." And in the darkest hours of the war, said Lowell, he had "remanned ourselves in his own manhood's store," had become "himself our bravest crown."