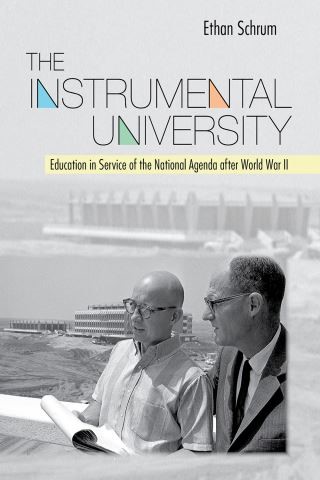 Education in Service of the National Agenda after World War II

In The Instrumental University, Ethan Schrum provides an illuminating genealogy of the educational environment in which administrators, professors, and students live and work today. After World War II, research universities in the United States underwent a profound mission change. The Instrumental University combines intellectual, institutional, and political history to reinterpret postwar American life through the changes in higher education.

Acknowledging but rejecting the prevailing conception of the Cold War university largely dedicated to supporting national security, Schrum provides a more complete and contextualized account of the American research university between 1945 and 1970. Uncovering a pervasive instrumental understanding of higher education during that era, The Instrumental University shows that universities framed their mission around solving social problems and promoting economic development as central institutions in what would soon be called the knowledge economy. In so doing, these institutions took on more capitalistic and managerial tendencies and, as a result, marginalized founding ideals, such as pursuit of knowledge in academic disciplines and freedom of individual investigators.

The technocratic turn eroded some practices that made the American university special. Yet, as Schrum suggests, the instrumental university was not yet the neoliberal university of the 1970s and onwards in which market considerations trumped all others. University of California president Clark Kerr and other innovators in higher education were driven by a progressive impulse that drew on an earlier tradition grounded in a concern for the common good and social welfare.