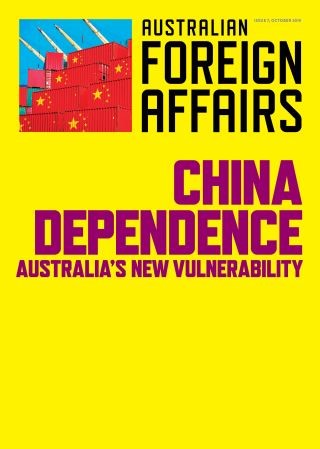 “There is no Australian future – sunlit or shadowed – in which China will not be central.” ALLAN GYNGELL

The seventh issue of Australian Foreign Affairs explores Australia’s status as the most China-dependent country in the developed world, and the potential risks this poses to its future prosperity and security.

China Dependence examines how Australia should respond to the emerging economic and diplomatic challenges as its trade – for the first time – is heavily reliant on a country that is not a close ally or partner.


PLUS Correspondence on AFA6: Our Sphere of Influence from Jonathan Pryke, Wesley Morgan, Sandra Tarte and more.