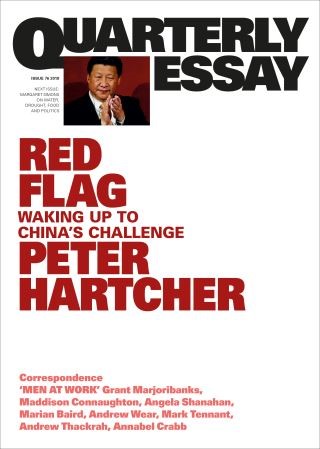 Waking Up to China's Challenge

China has become a key nation for Australia’s future – for our security, economy and identity. But what are China’s intentions when it comes to Australia?

In this gripping account, Peter Hartcher shows how Beijing stepped up its campaign for influence, over hearts and minds, mineral and agricultural resources, media outlets and sea lanes. Reactions have included panic, xenophobia and all-the-way-with-the-USA – but the challenge now is to think hard about the national interest and respond with wisdom to a changed world. This urgent, authoritative essay blends reporting and analysis, and covers the local scene as well as the larger geopolitical picture. It casts fresh light on Beijing’s plans and actions, and outlines a way forward.

“Australia and China have got rich together. For Australia, that is quite enough. But China’s government wants more. As much power and influence over Australia as it can possibly get, using fair means or foul. But what Beijing can get is limited not only by China’s abilities, but also by Australia’s will. In each case where Chinese officials or agents attempted to intrude, they met Australian resistance. And failed. For all its power, China is neither all- powerful nor irresistible. Australia can shape its engagement with Beijing.” —Peter Hartcher, Red Flag