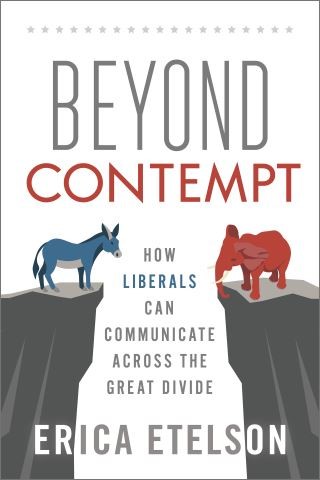 How Liberals Can Communicate Across the Great Divide

How liberals can talk with, and listen to, Trump supporters without blowing a fuse

Liberal and progressive frustration, grief, and alarm over Trump's destructive political agenda and behavior have prompted mounting disdain for Trump supporters and other conservatives. This reaction is contributing to political polarization and unwittingly serving to strengthen Trump’s hand as he sows divisiveness and hatred. In Beyond Contempt , Erica Etelson shows us how to communicate respectfully, passionately, and effectively across the political divide without soft-pedaling our beliefs. Using Powerful Non-Defensive Communication skill sets, we can express ourselves in ways that inspire open-minded consideration instead of triggering defensive reaction. Providing detailed instruction and dozens of examples of how to discuss hot button topics, Beyond Contempt is a must-have guide to productive dialogue that can defuse hostility, build trust, and open hearts and minds in unexpected ways.

About the Author
Erica Etelson is a writer, community activist, and certified Powerful Non-Defensive Communication facilitator. A former human rights attorney, she has advocated in support of welfare recipients, prisoners, indigenous peoples, immigrants, and environmental activists. She has also organized for clean, community-owned energy as part of a just transition to a local, low-carbon economy. Following the 2016 election, Etelson became active in the resistance movement and in left-right dialogue initiatives. Her articles have appeared in the San Francisco Chronicle , San Jose Mercury News, Progressive Populist , Truthout and Alternet . She lives with her husband and son in Berkeley, California.