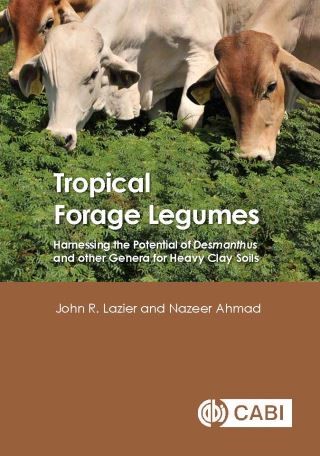 The development of legume use in agricultural production in the tropics lags far behind the temperate areas and extensive research over recent decades has aimed to rectify the lack of available leguminous fodder species available for heavy clay soils. This book draws together that research and explores the importance of heavy clay soils to agricultural productivity in the tropics and subtropics and the identification of adapted, productive forage legumes for these environments. Covering over four decades of international research, Tropical Forage Legumes: · Includes a detailed analysis of the forage germplasm available which is adapted to heavy clay soils · Covers the adaptation of a wide range of forages on Australian clay soils, and the evaluation of successful native and exotic forage legume species that have potential for those in Belize · Explores the genetics of the most promising genera, Desmanthus and Stylosanthes, and looks at the results from countries where new genotypes have been found to be productive and persistent · Provides details of a number of exciting new species, especially those in Desmanthus which have the potential to be, or have been commercialized · Makes recommendations for future research Providing an invaluable example of how a global search for adapted and productive forage germplasm has been - and can be - undertaken, and allowing access to a significant body of knowledge that was acquired before the digitalization of reports, this book will be a key resource for new scientists and experienced researchers in the areas of agriculture and forage agronomy.