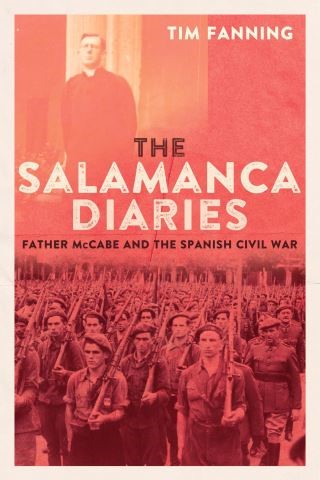 In July 1936, an army-led coup against the democratically elected republican government ushered in the Spanish Civil War. Father Alexander J. McCabe was rector of the Irish College in Salamanca when General Francisco Franco seized power a few months later and established his GHQ in the medieval city.

McCabe recorded the arrival of the nationalist war machine in his diaries, vividly documenting the horror of the repression and his encounters with Franco, Nazi officers and diplomats, British and American spies and journalists, and adventurers and charlatans from around the world who flocked to Salamanca. He also observed the implosion of General Eoin O’Duffy’s ill-fated Irish Brigade, first as one of its chaplains and later mediating between the nationalist high command and O’Duffy. He unsuccessfully attempted to dissuade a disillusioned O’Duffy from returning to Ireland with the Irish Brigade in 1937.

Historian Tim Fanning uses McCabe’s diaries to provide a fascinating account of life in Spain before, during and after the war, as well as McCabe’s memories of growing up in Ireland at a time of momentous change. This is the troubling and enthralling story of an eyewitness to one of the most tragic episodes in twentieth-century European history.