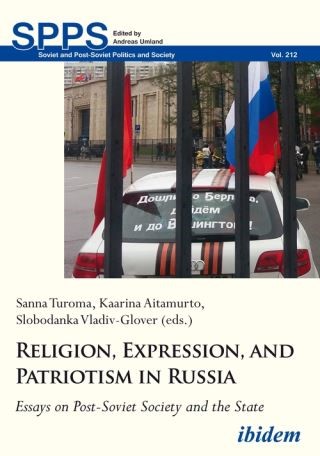 Religion, Expression, and Patriotism in Russia

Essays on Post-Soviet Society and the State

The 2010s saw an introduction of legislative acts about religion, sexuality, and culture in Russia, which caused an uproar of protests. They politicized areas of life commonly perceived as private and expected to be free of the state's control. As a result, political activism and radical grassroots movements engaged many Russians in controversies about religion and culture and polarized popular opinion in the capitals and regions alike.

This volume presents seven case studies that probe into the politics of religion and culture in today's Russia. The contributions highlight the diversity of Russia's religious communities and cultural practices by analyzing Hasidic Jewish identities, popular culture sponsored by the Orthodox Church, literary mobilization of the National Bolshevik Party, cinematic narratives of the Chechen wars, militarization of political Orthodoxy, and moral debates caused by opera as well as film productions. The authors draw on a variety of theoretical approaches and methodologies, including opinion surveys, ethnological fieldwork, narrative analysis, Foucault's conceptualization of biopower, catachrestic politics, and sociological theories of desecularization.