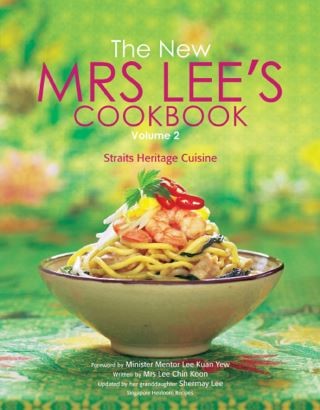 It started out as a simple labour of love for her family, and grew to become a national phenomenon. Mrs Lee Chin Koon (1907–1980), mother of Singapore's founding Prime Minister Lee Kuan Yew, and a Peranakan by descent, spent a lifetime compiling her own collection of family recipes. She had intended to pass down the secrets of her homecooked Peranakan and local dishes, perfected over the years in her very own kitchen, to her children and grandchildren. In 1974, her heritage recipes were eventually published as Mrs Lee's Cookbook, and were embraced by an entire nation. Her book has since seen numerous reprints, and has become widely accepted as one of the leading authorities on Peranakan and local cuisine in Singapore.

Since the original version remains out of print, Mrs Lee's granddaughter Shermay Lee has faithfully reworked these well-loved heirloom recipes into two fully illustrated cookbooks, The New Mrs Lee's Cookbook: Volume 1 and Volume 2, launched in 2003 and 2004 respectively. These revised editions have become well-loved classics in their own right, showcasing the richness and diversity of modern Peranakan cooking, while staying true to its traditional roots. The first volume won the prestigious Gourmand World Cookbook Awards in 2003. This second cookbook, The New Mrs Lee's Cookbook Vol. 2: Straits Heritage Cuisine, features a mix of Chinese, Malay and Eurasian dishes, and also includes anecdotes explaining their origins. New sections have also been added, including: