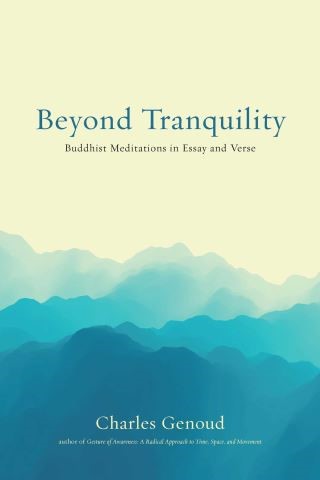 Buddhist Meditations in Essay and Verse

One of Buddhism’s most respected authors inspires readers with a creative and intriguing journey into the heart of Buddhist meditation practice.

Beyond Tranquility is an invitation to inner experience. In these pages, one of Buddhism’s most respected scholar-sages creatively distills decades of practice, reflection, and teaching into essential truths. Touching on the full scope of core Buddhist philosophical and meditation traditions, Charles Genoud draws on ancient Buddhist suttas, masters like Nagarjuna and Dogen, and even seers and philosophers such as Eckhart, Nietzsche, and Sartre, as well as the great innovators of the modern novel and modern dance. Weaving together the wisdom of these great minds in a poetic style uniquely his own, Genoud invites you into the heart of Buddhist meditation and practice. Here, with the immediacy and wry humor of haiku, he proves an astute and subtle guide to the pitfalls and paradoxes that eventually confront every meditator, and to the most skillful ways through them.

Genoud’s powerful, experiential language transmits the meditative experience rather than merely describing it—and his style will resonate with the teachings of Zen and Dzogchen, the writings of contemplative philosophers, and with dancers and other artists whose work is built upon a “body of presence.”

Charles Genoud: Charles Genoud has studied and practiced Tibetan Buddhism since 1970. For a number of years, he studied with Geshe Rabten, and then continued under the guidance of Dilgo Khyentse Rinpoche. At the Institute of Buddhist Dialectics in Dharamsala, India, he studied psychology, epistemology, and Buddhist logic. He has also practiced in the Theravadan tradition in monasteries in Burma and Thailand, and in meditation centers in Nepal, the United States, England, and France. He has taught meditation since 1995.