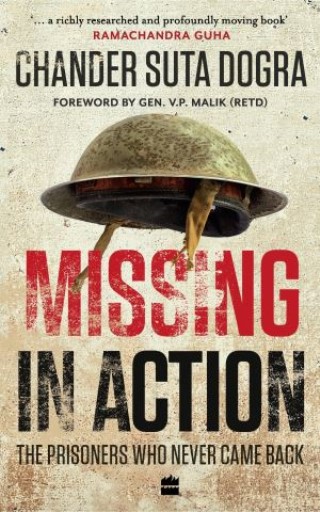 Missing in Action: The Prisoners Who Never Came Back

The story of India's soldiers missing in action is one that remains unfinished, a spillover of the wars with Pakistan. These are men who went missing in enemy territory while on daring missions during the 1965 and 1971 Indo-Pak wars. The nation has forgotten them, though successive governments continue to make token acknowledgements about their missing status. Over the last five decades, there have been scattered reports offering information piecemeal, but this is the first time the saga has been fully told. The result of years of research, the book unearths startling revelations that shed new light on the subject. Amid much hearsay and dismissive commentary, this book is an attempt to find answers to the question, 'What happened to these men?' It also hopes to open up a debate on how soldiers are often used as pawns by governments, even as they pay lip-service to their cause.

Chander Suta Dogra: Chander Suta Dogra is a journalist and author. Her first book, Manoj and Babli, explored the tough road to justice for victims of honour killings. She has worked for various publications, including Outlook, Indian Express, Hindu and Hindustan Times. She writes on politics, governance, defence, gender and human rights.