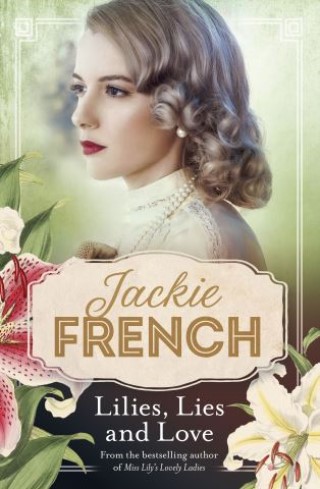 As the King of England wavers between duty and love, Sophie knows that she must choose duty.

The year is 1936 and the new King Edward VIII wishes to marry American divorcee, and suspected German agent, Wallis Simpson. Top-secret documents that the king must read and sign are being neglected for weeks, and some are even turning up in Berlin.

And as Germany grows its military might with many thousands of new fighter planes every year, Britain and its empire are under increasing threat.

Can Miss Lily's most successful protege, Sophie Vaile, the Countess of Shillings, seduce the new king, prevent his marriage to Wallis Simpson, and turn him from fascism?

And if a man can sacrifice his life for his country, should a woman hesitate to sacrifice her honour?

Based on new correspondence found in German archives, Lilies, Love and Lies is a work of fiction.

In the fourth title in the Miss Lily series, Jackie French explores one of the most controversial events in history that saw the unthinkable happen when a king chose love over duty.

Jackie French: Jackie French AM is an award-winning writer, wombat negotiator, the 2014–2015 Australian Children's Laureate and the 2015 Senior Australian of the Year. In 2016 Jackie became a Member of the Order of Australia for her contribution to children's literature and her advocacy for youth literacy. She is regarded as one of Australia's most popular children's authors and writes across all genres — from picture books, history, fantasy, ecology and sci-fi to her much loved historical fiction for a variety of age groups. ‘Share a Story' was the primary philosophy behind Jackie's two-year term as Laureate.