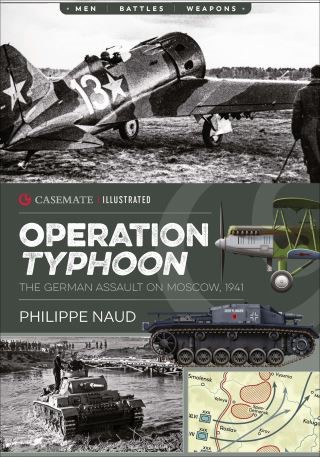 The German Assault on Moscow, 1941

A visual look at the Nazi assault on the Soviet capital in the series that’s “a welcome addition . . . targeted at the general World War II enthusiast” (Globe at War).

After the initial successes of Operation Barbarossa, at the end of September 1941, Hitler turned his focus to Moscow, with the unshakeable belief that capturing the capital would knock the Soviets out of the war. On the face of it, it was an unequal matchup in Germany’s favor, but the picture was, in fact, a great deal more complex; the Germans had suffered very significant losses since the invasion of Russia had begun and had issues with logistics and air support. The Soviets, under the command of Gen. Zhukov, were beginning to be better supplied with reinforcements and were prepared to defend to the death.

This volume in the Casemate Illustrated series concentrates on the main German assault of October 1941. Guderian’s panzer divisions at first made sweeping gains, as they had done so many times before, and large parts of the Red Army were encircled at Vyazma and Bryansk. These successes allowed the Soviets time to regroup, as the encircled armies did not surrender and had to be dealt with. Then, three engagements followed at Mtsensk, Maloyaroslavets and the Mojaisk defense line that proved that the war in the east was not entering its final days, as German high command believed.

Illustrated with over 150 photographs, plus profile drawings of tanks, vehicles, and aircraft, this book gives a vivid impression of the situation for both protagonists, and a detailed analysis of the critical days as the fate of Moscow—and perhaps the whole war—hung in the balance.