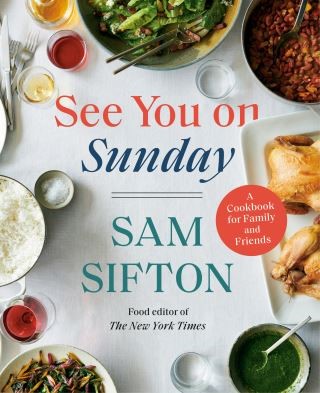 See You on Sunday

A Cookbook for Family and Friends

“A book to make home cooks, and those they feed, very happy indeed.”—Nigella Lawson

“People are lonely,” Sam Sifton writes. “They want to be part of something, even when they can’t identify that longing as a need. They show up. Feed them. It isn’t much more complicated than that.” Regular dinners with family and friends, he argues, are a metaphor for connection, a space where memories can be shared as easily as salt or hot sauce, where deliciousness reigns. The point of Sunday supper is to gather around a table with good company and eat.

From years spent talking to restaurant chefs, cookbook authors, and home cooks in connection with his daily work at The New York Times, Sam Sifton’s See You on Sunday is a book to make those dinners possible. It is a guide to preparing meals for groups larger than the average American family (though everything here can be scaled down, or up). The 200 recipes are mostly simple and inexpensive (“You are not a feudal landowner entertaining the serfs”), and they derive from decades spent cooking for family and groups ranging from six to sixty.

From big meats to big pots, with a few words on salad, and a diatribe on the needless complexity of desserts, See You on Sunday is an indispensable addition to any home cook’s library. From how to shuck an oyster to the perfection of Mallomars with flutes of milk, from the joys of grilled eggplant to those of gumbo and bog, this book is devoted to the preparation of delicious proteins and grains, vegetables and desserts, taco nights and pizza parties.

Sam Sifton: Sam Sifton is the food editor of The New York Times, a columnist for The New York Times Magazine, and the founding editor of the Times’s Cooking section, an award-winning digital cookbook and cooking school. Formerly the newspaper’s national news editor, chief restaurant critic, and culture editor, he is also the author of Thanksgiving: How to Cook It Well. He lives in Brooklyn with his wife and two children.