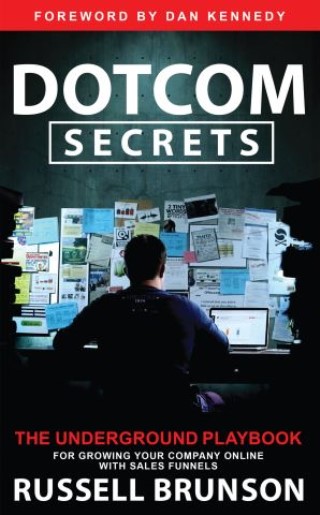 The Underground Playbook for Growing Your Company Online with Sales Funnels

Master the science of funnel building to grow your company online with sales funnels in this updated edition from the $100M entrepreneur and co-founder of the software company ClickFunnels.

DotCom Secrets is not just another "how-to" book on internet marketing.
This book is not about getting more traffic to your website--yet the secrets you'll learn will help you to get exponentially more traffic than ever before.
This book is not about increasing your conversions--yet these secrets will increase your conversions more than any headline tweak or split test you could ever hope to make.
Low traffic or low conversion rates are symptoms of a much greater problem that's a little harder to see (that's the bad news), but a lot easier to ﬁx (that's the good news).
What most businesses really have is a "funnel" problem. Your funnel is the online process that you take your potential customers through to turn them into actual customers. Everyone has a funnel (even if they don't realize it), and yours is either bringing more customers to you, or repelling them.
In this updated edition, Russell Brunson, CEO and co-founder of the multimillion-dollar software company ClickFunnels, reveals his greatest secrets to generating leads and selling products and services after running tens of thousands of his own split tests.
Stop repelling potential customers. Implement these processes, funnels, frameworks, and scripts now so you can fix your funnel, turn it into the most profitable member of your team, and grow your company online.

Russell Brunson: Russell Brunson started his first online company while he was wrestling in college. Within a year of graduation, he had sold over a million dollars of his own products and services from his basement. Over the past 15 years, he has built a following of over a million entrepreneurs, sold hundreds of thousands of copies of his books Dotcom Secrets and Expert Secrets, popularized the concept of sales funnels, and co-founded the software company ClickFunnels, which helps tens of thousands of entrepreneurs quickly get their message out to the marketplace. He lives in Idaho with his family, and you can visit him online at RussellBrunson.com.